bs"d
Background:
In April 2015, in a Park Slope Food Coop General Meeting, the BDS movement within the Brooklyn Park Slope Food Coop succeeded in placing a BDS Agenda Item to Boycott Soda Stream because they, an Israeli, Jewish Company was situated in Judea and Samaria aka  by Israel's enemies as the "Occupied West Bank". Soda Stream employed Jew and Noahides alike among them 50 Palestinians offering them great work conditions, pay and benefits.
The pro BDS presenters at this PSFC General Meeting started presenting their agenda by hanging untruthful,  misleading offensive pictures of the IDF "terrorizing" Palestinians terrorists or terrorist wannabees.  The membership present at this Park Slope Meeting passionately protested this provocative BDS Agenda Item.   Because of the "disruption" by the anti BDS group,  the BDS presenters were unable to present their BDS Agenda item. In retaliation, the Disciplinary committee of the Brooklyn Park Slope Food Coop brought charges against 4 of the protesters.  Those that protested this BDS agenda item was far greater than these 4 individuals. (Recently the trial was held and these long time members of the Park Slope Food Coop were suspended for a year.)
Due to BDS pressures, Soda Stream was forced to move from Judea and Samaria, leaving 50 Palestinians jobless.
Not satisfied with succeeding in disciplining the Anti BDS protesters, and sufficiently stopping Soda Stream,  this BDS group within the Coop are at it again, now protesting Soda Stream moving to the Negev Industrial Park. This is their flier:
The Displacement of Bedouin Palestinians in Israel. What is Soda Stream's role
https://drive.google.com/file/d/0B86sGl9yfinjbkFyWTV0ZzFpaHRNWDA0NmFWVnF4U25BdHc4/view?usp=sharing 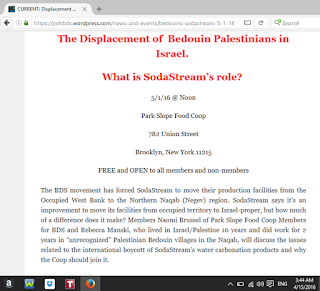 ANTI BDS PROTESTERS WILL NOT BE SILENCED!
Notice to all Pro Israel individuals and  groups to come and picket this BDS Meeting which is unlawful according to the Park Slope Food Coop regulations:
Protest the Park Slope Food Coop BDS Meeting at 782 Union Street, West of 7 avenue. Q to Seventh Ave., 2 3 to Grand Army Plaza.
B67, B69 to Union Street, B41 to 7 Ave,
The BDS meeting is to take place at 12 noon. It would be a good idea if people arrived at about 11.30 so we could hand out fliers as people enter the coop. Please tell everyone.
We Demand that the PSFC stop their terror funded BDS agenda items and present the truth. We expect them to hold meetings to present the following Agenda Items in answer to the Hamas terror funded BDS AGENDA. HATEFULE BDS Agenda must be banned from the PSFC (Park Slope Food Coop) because not only does it wish to destroy Palestinian and Beduins job opportunities, it promotes Terror and out to destroy Israel!
For  more on this topic:
Please protest another BDS promotion workshop at the Food Coop http://shemittahrediscovered.blogspot.com/2016/04/re-please-protest-another-bds-promotion.html
Sincerely,

Robin Ticker
Israel Advocacy Calendar (www.IsraelAdvocacyCalendar.com).
Activist emails sent to my list  are L'Ilui Nishmat Yisrael ben David Aryeh ob"m (Izzy - Kaplan) and Howard Chaim Grief great activists and lovers of Eretz Yisroel, Am Yisroel and the Torah. Yehi Zichronum Baruch.  May their memories serve as a blessing.
Most of these emails are posted on Shemittahrediscovered.blogspot.com
Personal emails to individuals will not be posted to my blog.
Posted by Robin Ticker at 1:26 PM No comments:

Posted by Robin Ticker at 11:23 AM No comments:

Posted by Robin Ticker at 11:13 AM No comments: