To: filtering@bluecoat.com
From: Robin Ticker


Re:Dispute of  K9 blocking Pamela Geller's website since it was designated as Violent/Racist/Hate:

As an Orthodox Jew I am extremely appreciative of K9s protection from many unwanted sites.

However, as an Orthodox Jew and as a Child of Holocaust Survivors from both of my parents and my Mother in law ob"m as well, who went through years of h-ll in Nazi Concentration camps,  I understand better than most what Violent/Racist/Hate designation category is all about.

Pamela Geller is fighting Violence, Racism and Hate of Radical Islam.  Her Website serves to report and expose Radical Islam and terror activities of ISIS and Jihad ideology that is prevalent all over the world.  Radical Islam is synonymous with Violence/Racism and Hate not to mention anti-Semitism and pure unadulterated evil.

Why is Hitler's Mein Kampf so popular among Palestinians? https://www.quora.com/Why-is-Hitlers-Mein-Kampf-so-popular-among-Palestinians

The Mufti of Jerusalem, Haj Amin al-Husseini is the founding father of the PLO Fatah movement.

Mohammed Amin al-Husseini (Arabic: محمد أمين الحسيني‎‎;[5] c. 1897[6][7] – 4 July 1974) was a Palestinian Arab nationalist and Muslim leader in Mandatory Palestine.[8]
Al-Husseini was the scion of a family of Jerusalemite notables,[9] who trace their origins to the eponymous grandson of Muhammad.[10]

https://en.wikipedia.org/wiki/Relations_between_Nazi_Germany_and_the_Arab_world
...Haj Amin al-Husseini became the most prominent Arab collaborator with the Axis powers. He developed friendships with high-ranking Nazis, including Heinrich Himmler, Joachim von Ribbentrop and (possibly) Adolf Eichmann.[citation needed] He contributed to Axis propaganda services and to the recruitment of Muslim and Arab soldiers for the Nazi armed forces, including three SS divisions consisting of Yugoslavian Muslims.[25 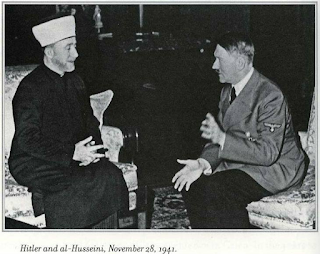 It is extremely upsetting for me to see Blue Coat K9 protection designate Pamela Geller as Violent/Racist and Hate when she is out there fighting the likes of Neo Nazi's and those who align themselves with Nazi ideology and the extermination of Jews which Radical Islam does.

I would seriously drain the swamp in Blue Coat K9 team of content analysts for those sympathetic to Radical Islam and biased against pro Israel, Zionist websites who truly understand the evils of radical Islam and educates others so that another Holocaust will never happen G-d forbid. Just google Yezidi's if you believe that Radical Islam is benign.  If you suppress such education offered by websites such as Pamela Geller, Blue Coat will be partners with evil to suppress those who will attempt to protect and defend potential victims of radical Islam and will only serve to weaken those who go on the offensive to fight pure unadulterated evil.

I am asking others like myself, Jews and Righteous Noahides who love your services otherwise, to protest this biased designation.

Everyone reading this letter please write a letter of protest of your own!  Thanks!

Looks like this site has been reviewed and categorized as Political/Social Advocacy. Most of the actual hate speech appears to be in the comment section which we do not typically include in analysis because it tends to be difficult to track/moderate even on high profile sites.

However, I do believe that even on its own the blog is very close to matching our Violence/Hate/Racism category definition:

Sites that depict extreme physical harm to people, animals or property, or that advocate or provide instructions on how to cause such harm. Also includes sites that advocate, depict hostility or aggression toward, or denigrate an individual or group on the basis of race, religion, gender, nationality, ethnic origin, or other involuntary characteristics. Includes content that glorifies self-mutilation or suicide.

The author often refers to her political opponents as “evil” or “primitives” which would be covered by the highlighted part of the category.

Thank you so much for your response!

Since this site exposes and tries to raise consciousness of  Violent/Racist and Hate masquerading as a religion, as Radical Islam does,  it is no wonder if some of the comments are indeed violent, racist and hateful by those who naturally would like to continue to act violently, with hate and being racist with nobody trying to stop them.

Can you please site specific examples where this website advocates Violence/Racism and Hate?  I have yet to come across such content.

Yes, it does denigrate radical Islam because radical Islam masquerades as a religion.  In fact radical Islam uses religion as a cover to execute the most heinous of crimes like rape, massacre be-headings, female mutilation and enslavement of women as per following of the practices of Mohammad in the 7th century. Just talk to the recently freed Yezidi's slaves by Isis who are now in deep trauma and shock following their horrific enslavement by yes Primitives!

By the way ISIS stands for Islamic State.  Islam has much to do with the way the followers of Islam and Mohammad  conduct their lives!

By definition Islam means submission where others who don't follow to the dictates of Islamic Hadith as per their definition are considered 2nd class not worthy of basic human rights.  Isn't this the definition of racism? Hateful, violent, racist crimes against humanity are all being conducted under the guise of "religion".  If you want some concrete examples outside of Israel let me remind you of 9/11 and more recently Paris and Barcelona.  Jihad means Holy War.  Does that make Radical Islam a legitimate religion? I would call their abhorrent practices the definition of Evil.

So if the big bad wolf masquerades as Grandma and says that he is Grandma does that mean he is no longer a Wolf and not big and bad?

And if Goldilocks understands that she is dealing with a big bad wolf and not Grandma and says some hateful things about that wolf who wants to eat her, trying to save her own skin, would she be categorized as hateful/violent and racist as you might suggest?

Isn't it bad enough the big bad Wolf wants to eat her without you coming along and helping him?

Yes someone who engages in acts of terror as I itemized above can be called evil and primitive. Those who glorify and engage in global terror should be designated as evil.  If not what does evil mean? One can justify labeling a murderer a murderer because the designation is based on factual evidence and not on racism. Only someone who wants to empower murderers and evil would call those who call it truthfully as it is,  racists.

You can clear K9 categorization cache by following these directions:

3032 Tomcat Inox
QUALITY POCKET PISTOLS.
The same dedication to advanced design, uncompromising quality and strict quality control that make the 92FS, Cougar and Cheetah such international standouts is found in all Beretta small caliber, pocket-size pistols. Simplicity, safety and practical use are their best qualities.

21 A Bobcat Inox
QUALITY POCKET PISTOLS.
The same dedication to advanced design, uncompromising quality and strict quality control that make the 92F, Cougar and Cheetah such international standouts is found in all Beretta small caliber, pocket-size pistols. Simplicity, safety and practical use are their best qualities.

92 Brigadier Inox
The Beretta 92FS Brigadier is designed to be a low-recoiling, high-durability version of the standard 92FS (M9) combat pistol. To minimize recoil, the slide features a heavy profile–which also enhances durability–and the grips are Hogue soft rubber wraparound panels that greatly absorb the momentum of the pistol upon firing.

92 Compact with Rail Inox
The new 92 Compact Rail is a formidable companion for those requiring a smaller format. All of the strengths of the 92 in a compact size for off-duty carry, plainclothes work, or everyday concealment

92X Compact W/Rail
The 92X Comapct w/Rail takes the proven reliability of the venerable M9 Family to the next level. Incorporating new universal ergonomic features such as a standard straight backstrap profile frame with new flat and wraparound highly textured grips included to fit the majority of shooters needs out of the box.